If you’re looking for a tropical paradise in Japan, Okinawa is the answer.

Often called the Hawaii of Japan, Okinawa is the group of islands located south of the main islands. The biggest island of Okinawa, Honto, is the most visited island since it’s the most populated while also having incredibly beautiful beaches and landscapes. It’s also home to Japan’s most famous aquarium as well as many American-influenced shops and cuisines. This guide will show you everything you need to know for traveling to Okinawa.

Don’t forget to pin it for later!

Okinawa consists of over 160 islands, 49 of which are inhabited. Okinawa was part of the Ryukyu Kingdom, which extended from Kyushu all the way to Taiwan and then became a part of Japan in the 19th century. After World War 2, Okinawa was occupied by America for roughly 30 years before returning to be a part of Japan again. As a result of its past, you can see evidences of Ryukyu, American, and Japanese culture in this small island.

Okinawa’s weather is as one expects of a tropical island. In the summer, it gets hot and humid while in the winter, it stays relatively warm, but still too cold to go swimming. Just like most tropical islands, there are also lots of typhoons that pass by Okinawa, usually in the summer. It’s important to check the weather often when traveling to Okinawa in case the typhoon may affect flights, ferries, and activities.

We think that the best time to visit Okinawa is any time except the middle of summer. In the summer, Okinawa is blazingly hot and humid while getting a lot of rainfall. May and June are considered rainy seasons while July and August are typhoon season. Ironically, summer is also peak tourist season since Japan’s major holidays tend to be around this time as well.

March, April, and October are probably the best months since you escape the heat and crowd while also enjoying the waters. January is also a great time to go if you want to experience the cherry blossoms in Okinawa, much earlier than other parts of Japan.

Winter is also a good time to go if you’re coming from a colder climate (like from anywhere else in Japan) and want to escape the cold. However, the waters lose their warmth so swimming may not be an option for everyone.

How to Get There

The only way to get to Okinawa is by either airplane or ferry.

Naha Airport connects to every major airport in Japan, and a few from other countries nearby. The best way to get to Okinawa from far away would be to fly into a big city, like Tokyo or Osaka, and transfer to Naha Airport from there. It may also be a good way to see a part of main Japan before enjoying the island life in Okinawa.

You can check below for ways to get to Okinawa from your country!

In Okinawa, there is a monorail that runs from the airport to Naha city and various buses that connect Naha to the other parts of the island. To ride the public transportation in Okinawa, you can either buy individual tickets or get the OKICA transportation card, which you can charge up and easily ride the monorail or bus. If you’re coming from mainland Japan, the PASMO or SUICA card does not work in Okinawa and you would have to purchase the OKICA card.

While public transportation is available, the best way to see the beauty of Okinawa is by renting a car. With a rental car, you have access to remote beaches and parts of the island and get to places much faster. In addition to that, rental cars in Okinawa tend to be much cheaper than the rest of Japan, so it’s good to take advantage of that!

The weather is hot and humid from April to November, so you’d want to wear as light as possible. During the winter months, you might want to wear long sleeves and pants, but also keep some shirts as well.

Whether it’s rainy season or not, Okinawa has random rainfalls, so it may also be a good idea to bring a waterproof jacket.

For a more detailed clothing guide, you can check the official Okinawa Travel Guide.

You need cash, not just in the natural parts of Okinawa, but also in cities like Naha as well. Many chain restaurants, supermarkets, and big establishments accept credit card, but cash is the only acceptable payment everywhere else. If you need cash while there, you can withdraw from any convenience store or a Japan Post ATM.

Going to a tropical island means that you’ll be going to the beach as often as possible. Instead of figuring it out when you get there, it can be more cost effective to prepare everything beforehand. Here is a general packing checklist of beach essentials.

As mentioned before, Okinawa has random rainfalls, whether it’s rainy season or not. Having a compact umbrella around can be useful in these situations.

If you are renting a car you need either a Japanese drivers license or an International Drivers Permit. In the USA, an IDP application may take around 10-15 business days, so make sure to plan ahead!

It’s hard to travel without wifi these days. When traveling to Okinawa, you need a wifi provider that has coverage in the smaller islands as well,

The more you use your phone, the more battery it uses.

You may need a power bank when traveling to countryside, when you’re not quite sure when the next time you can find an electric socket.

The Churaumi Aquarium is located on the north western tip of the main island, in Ocean Expo Park. It has one of the biggest tanks in the world that can hold 7.5 million liters and houses two whale sharks, manta rays, and hundreds of marine life.

How to get there

The fastest way to get there is by car, by taking the Okinawa Expressway. There are also several local and express buses which you can take from Naha, Nago, and other parts of the island. You can see all the bus information and timetable on this website.

If you’re at a tropical island, it only makes sense to eat pineapples (and maybe go to a theme park about it).

Okinawa is famous for its pineapples and at Nago Pineapple Park, you can ride through fields of them and learn about the various different kinds. There’s also a cafe that offers various pineapple dishes and a shop where you can take home some pineapple sweets, cider, alcohol, cosmetics, and other souvenirs! 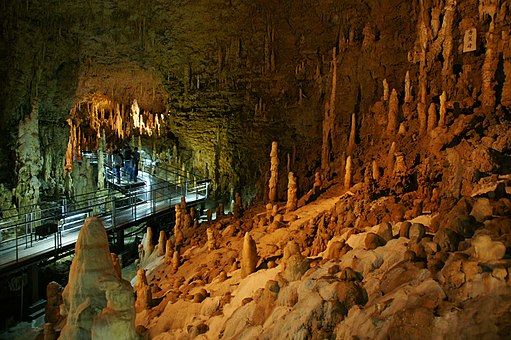 Okinawa World is a theme park based on the Okinawan culture with lots of attractions. Inside is the 5km long Gyokusendo Cave, the second longest cave in all of Japan. There’s also a village with Ryukyu-style houses with hands-on workshops inside for glass blowing, sugar cane processing, pottery making, and much more. The park also features a snake park, brewery, and a huge orchard where they grow various island fruits.

If you want to witness the symbol of Okinawa, you need to check out the Shuri Castle. Shuri Castle is located on top of a hill overlooking Naha and is part of the UNESCO World Heritage site as part of the Ryukyu Kingdom. Inside is a small traditional Japanese style cafe where you can sit down and have some tea with light snack. Occasionally, there are festivals held at the castle grounds during certain times of the year.

Note: The castle had been destroyed due to a fire in 2019 and is currently under re-construction. Constructions won’t be complete until roughly 2022, but you can still visit the castle park area during the re-construction.

The Nakijin and Nakagusuku Castle Ruins are another UNESCO World Heritage site that’s part of the Ryukyu Kingdom. Here, you won’t find a full castle-like structure, but rather a field of remainders of the castle walls, thus being called the castle ruins. 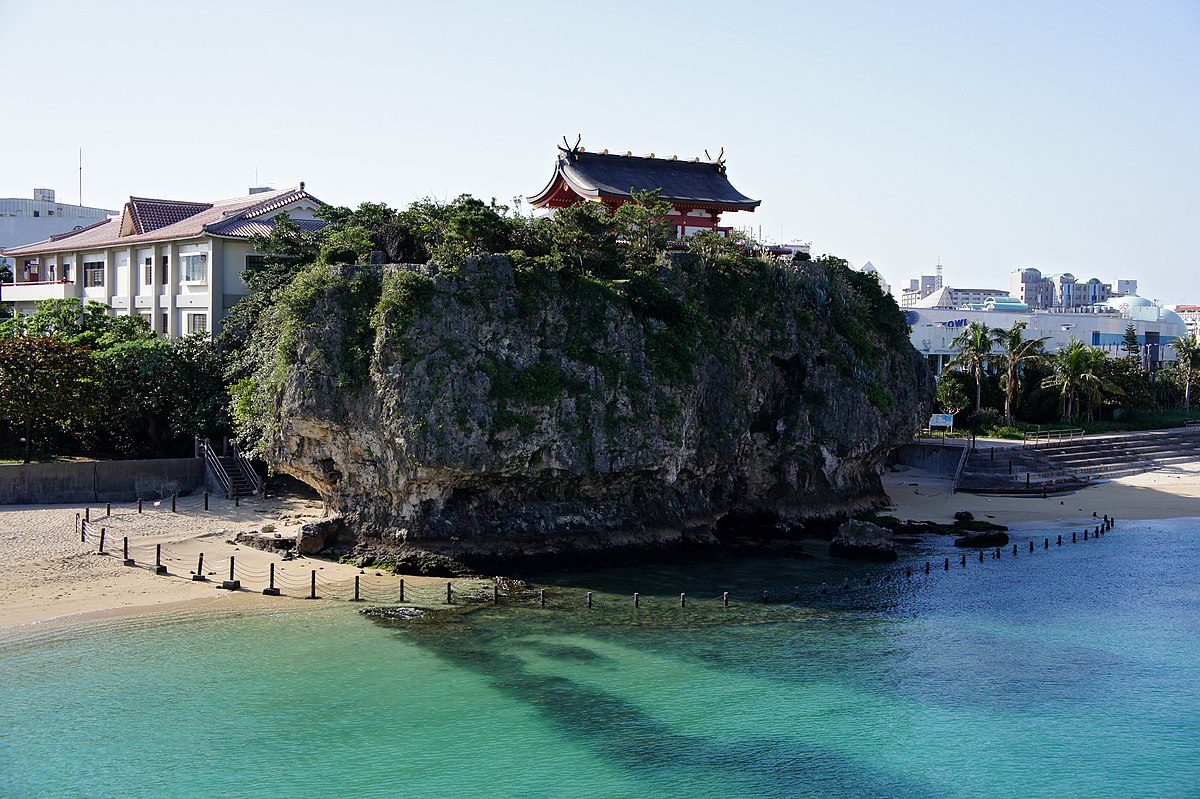 When you arrive to Naha, Naminoue beach may be the first beach you might visit. In fact, Naminoue Beach is the only beach in Naha city and also the only one with a highway running over it. It’s not exactly the type of beach that comes to mind at a tropical island, but the waters are very clear and it’s the most accessible beach from Naha.

If Naminoue Beach doesn’t satisfy your tropical cravings, then perhaps Ginowan Beach will. Located only 20 minutes away from Naha, Ginowan Seaside Park is a huge national park with an endless beach on the other end. Here, you can not only enjoy the tropical beach settings, but also enjoy a nice barbecue, participate in sports, and use clean beach facilities such as showers and bathroom.

Halfway up north is Cape Manzamo, the perfect place to find stunning views overlooking the ocean. The cape is famous for the elephant trunk shaped roots and is a popular spot for scuba diving as well since it’s surrounded by corals. The cape is also visible from the ANA Intercontinental Resort Hotel, on the opposite side of the water.

If you can make it to the north of the island, you can find the most beautiful beaches in Okinawa. Kouri Island is a small island in the Nakijin area. You can access Kouri island through a 2 km bridge with an amazing view.

Snorkeling in Kerama Islands – Dip in the water with various marine life in the archipelago next to the main islands.

Onna Village Marine Walk – Walk on the ocean floor with a special dive helmet and witness marine life up close.

Semi-Submersible Boat Ride – Descend to the ocean in a semi-submarine and witness marine life through windows from the boat.

Parasailing Experience – Safe and fun parasail ride up to 50 meters above the ocean and a nice boat ride over the tropical ocean.

Surfing Experience – Learn to surf from a licensed instructor in the beautiful beaches of Okinawa.

If you want to find the “city side” of Naha, look no further. International Street (Kokusai Dori) is the central street of Okinawa and has everything from shopping to restaurants and various kinds of entertainment. Personally, we love to visit here after sunset, when the neon signs light up the streets. This is also a great place to shop for souvenirs as many shops sell the Okinawa classics such as Shisa merchandise and snake sake.

American Village is a huge, flashy entertainment complex located in the city of Mihama. It was once used to be an American base that’s now been turned into a popular entertainment district. There are more than 100 American influenced shops and restaurants that sell various American and Japanese goods.

It’s a nice unique place to go for sightseeing, shopping, and trying out various Okinawan foods (plus it’s right next to the beach). American Village is quite huge so you may want to refer to this interactive map for information on individual shops.

How to get there:

There are various buses that connect American village to both the Naha side and Nago side. You can find the bus information here.

There are many islands in Okinawa and Honto is only half the experience. Each island has its own culture and hidden nature. Some are reachable by ferry from Naha while others require plane transportation. Here are some islands that are worth visiting among the Okinawa Islands!

What are you looking forward to the most in Okinawa?