When most people hear the about Hirosaki, two words come to mind: apple and castle. Hirosaki is most known for the abundance of delicious apples, as well as the famous Hirosaki Castle Park Sakura Festival, which is held every year during the sakura season. Outside of apples and castles, Hirosaki is a small historic town with a friendly local community. There are unique cultures and interesting places around this small town. Here, we’ll show you several ways to enjoy a trip to Hirosaki!

How to Get to Hirosaki

From Tokyo By Bus

You can get to Hirosaki directly by bus. It’s quite an affordable option and you don’t need to transfer, but the only downsides are that there are only a couple buses a day and it takes 8-10 hours.

From Tokyo By Train

If you decide to go by Shinkansen, it would take only 3 hours to get to Aomori City, where you transfer to the Ou line to get to Hirosaki. Taking the Shinkansen is also much more expensive compared to the bus option, but you can get to Hirosaki with no additional cost if you use the Japan Rail Pass.

The best time to visit Hirosaki is undoubtedly during the Hirosaki Castle Park Sakura Festival, around late April or early May. There are hundreds of sakura festivals held throughout Japan, but the one at Hirosaki Castle is one of the most famous festivals. The sakura usually blooms around late April to early May, and many people visit Hirosaki during Golden Week, a national holiday week that happens to be around this time.

If you’re visiting Hirosaki, we recommend going before Golden Week, around the last 10 days of April, so you can experience the local culture and the sakura celebration before it becomes flooded with tourists from all over Japan.

Hirosaki Castle is the pride and joy of the city of Hirosaki.

It’s one of the most visited places in the whole Aomori Prefecture and especially popular during the sakura season. The Hirosaki Sakura Festival is one of the most famous sakura festivals in the whole country and the number of visitors to the castle in one day can easily triple the total population in Hirosaki!

While Sakura season and fall foliage are the best times to visit, Hirosaki Castle Park is always a great place to stop by when in the area. 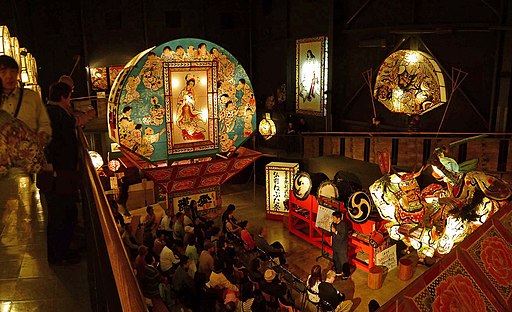 The Starbucks next to Hirosaki Park has a deep history. The building has been around since 1916 and served as the residence for a division commander Daihachi Dancho Kansha, followed by the mayor of Hirosaki. The building was then registered as one of Japan’s Tangible Cultural Assets and then renovated to serve as a Starbucks in 2016.

If you go here, you’ll notice that the building has a vintage look and the inside was designed to both preserve the historical design while serving customers.

The Former Hirosaki City Library is a great place to learn about the history of the area. It was built in 1903 to commemorate Japan’s victory in the Japan-Russo War. The building, as well as many other buildings from the early 19th century, has a bit of Western style since many Western missionaries came around this time.

The library closed down in 1931 and it is now used as a memorial and a historical landmark.

On the outer corner of Hirosaki Park is a calm and peaceful traditional Japanese garden. The garden’s creation commemorated the 100th year anniversary of Hirosaki City and it was named after the entrepreneur Fujita Kenichi, who owned the garden at the time.

Go a bit south of Hirosaki Castle and you’ll see a huge gate leading to Chushoji Temple. This temple is one of the main historical sights of Hirosaki and is the oldest wooden building in the city. There are statues of the 100 disciples of Buddha and a monument for the Tsugaru Clan, former rulers of the area.

The monastery dates all the way back to the 16th century and was built by the Tsugaru clan. This monastery is one of the most popular shrines visited in Hirosaki, especially the five-story pagoda.

Wherever you are in the city, you can always see a mountain in the background. Mt Iwaki is like the Mt Fuji of Hirosaki and is often called “Tsugaru-Fuji”. At the foot of the mountain is Iwakiyama Jinja and has a very serene atmosphere.

If you want to climb the mountain, it takes about 4-5 hours but only an hour if you take the cable car lift. You can go hiking in the summer months and during the winter, there is a ski resort.

Shirakami Sanchi is a mountain range that sits on the border of Aomori and Akita Prefecture. The core region of the mountain range is considered a UNESCO world heritage site because of the high number of beech trees that serve as home to many animals.

Getting into this core region requires some additional procedures, but one of the most popular routes is to hike up to the Anmon waterfalls on the northern edge of Shirakami Sanchi.

The Sakura Festival is one of the biggest events held in Hirosaki. Hirosaki Castle is home to over 2600 cherry blossom trees and there are over 50 different types. The Castle Park is HUGE and every part has a different scenery filled with cherry blossoms.

The festival starts around mid/late April and goes on for 2-3 weeks. During this period, there are food stalls set up where you can buy lots of different festival foods, play Japanese carnival games, and have a hanami (cherry blossom picnic) in lawns surrounded by the cherry blossom trees.

There are many unique ways to enjoy the sakura. Around the center moat, you can ride a traditional boat where a staff member guides you around in the petal covered lake. If you prefer to row you rown private boat, you can do that in the west moat, where the banks are lined up with trees. After sunset, the lights come on and you can walk around and experience the Yoruzakura (night sakura).

Here’s a video by the Hirosaki Tourism Bureau  to show you how incredible the Sakura trees in Hirosaki Castle are!

Another famous event at Hirosaki Castle is the Snow Lantern Festival! During the snow festival, the Castle Park is covered in over 400 snow lanterns and statues all made by the local citizens. There are also food stalls, night illuminations, various cultural artworks, fireworks, and activities such as a snow slide!

The festival is a short weekend event around the 2nd week of February and goes on for 3 days. Snow festivals are incredibly beautiful in Japan and if you happen to be in Japan during the early half of February, we highly recommend checking out the Hirosaki Castle Snow Lantern Festival!

Here’s a video introducing what to expect!

The Neputa Festival is a festival in the summer where they parade around the old town near Hirosaki Castle with over 70 traditional floats. The festival starts around 7:00pm during the first week of August. 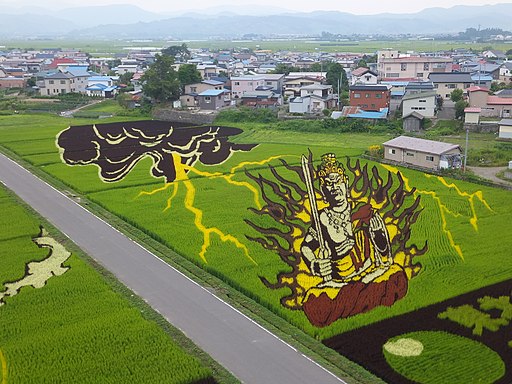 Japan has a long history with rice and in Hirosaki, rice has even become a form of art. Every year, over 700 local citizens collaborate and plan out the artwork and the result is always remarkable. The artwork is viewable around June to October and changes every year.

During the months from June to October, you can see the rice field artwork from a high point.

Hirosaki is a small town and most of what to see is somewhere between Hirosaki Station and Hirosaki Castle.