If you want to experience real, traditional Japan, then we recommend that you take a visit to Kagurazaka. Located just outside of the Imperial Palace, Kagurazaka used to be the geisha district in the Taisho Period in the early 20th century. While maintaining the traditional Japanese vibes, Kagurazaka has also developed a French community, with various French restaurants and supermarkets as well. Unlike most parts of Tokyo, Kagurazaka still maintains its traditional appearance, similar to that of places like Kyoto.

Kagurazaka is located in the central area of Tokyo, near Tokyo Dome and stretches out between Iidabashi Station and Kagurazaka station.

Tokyo Dome is a venue for many huge sporting events and right outside of the stadium is Tokyo Dome City. Here, there’s all kinds of things from an amusement park to hotels, many restaurants, a space museum, a hot spring, and so much more. You can easily spend a whole day within Tokyo Dome City and it’s kid-friendly as well!

Take a Stroll Through Kagurazaka Street

Koishikawa Korauen Garden was built in the 17th century and it’s one of the best gardens to visit in Tokyo. Located right behind Tokyo Dome, this garden feels like the hidden nature getaway in the middle of a busy city.

This garden is also one of the best places to go for sakura or fall foliage season so make sure to add that to your bucket list!

When you exit Kagurazaka Station, you may notice a bright red shrine gate when you come up exit 1. Akagi shrine is small compared to other famous shrines like Meiji, but it’s one of the cleanest, most modern shrines around. The whole shrine was redesigned in 2010 with a modern look and the whole place gives off an upscale atmosphere, which is quite uncommon for a shrine!

If you come to Kagurazaka, it’s worth visiting one of Tokyo’s 5 major shrines. The Tokyo Daijingu Shrine is close to the main Kagurazaka street and many people come to this shrine because it’s the shrine for marriage, love, and relationships (which is a big part of many people’s lives!).

When walking through Kagurazaka street, it’s hard to notice the big building with the red gate. Zenkokuji Temple is one of the most popular temples in the area and was built to worship one of the 7 lucky gods. There are two tiger statues guarding the front and it’s also a good place to bring your kids and pray to the luck gods! 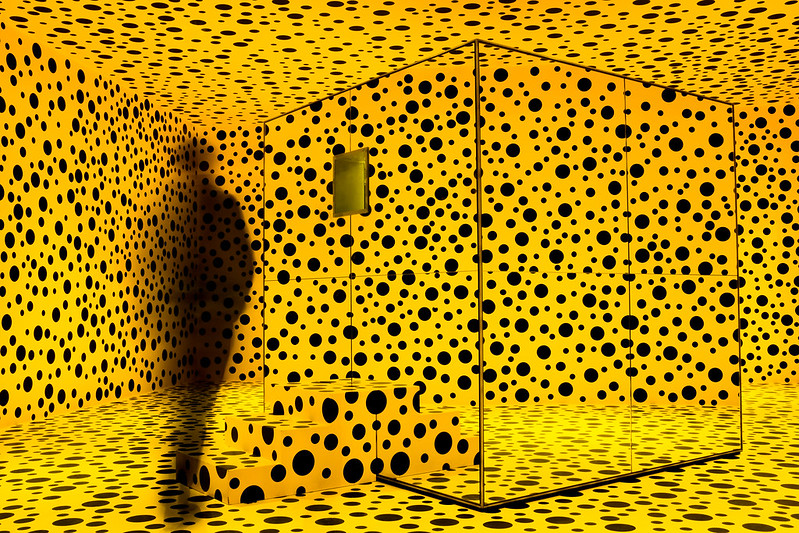 Yayoi Kusama is a world famous Japanese artist. Yayoi had a rough childhood and had hallucinations since she was little, which became the inspiration for her work. Her museum showcases some of her best work, including the famous polka dot designs. There’s no same day admission and you’re required to buy the tickets ahead of time. Here’s a link to the museum’s website.

If you’re looking for something free, you can check out the Science Museum at Tokyo University of Science. There’s various exhibitions that displays a lot of the technologies used during Japan’s industrial age. It’s a good place for a rainy travel day or somewhere to take your kids!

The Hidden Alleyways of Kagurazaka 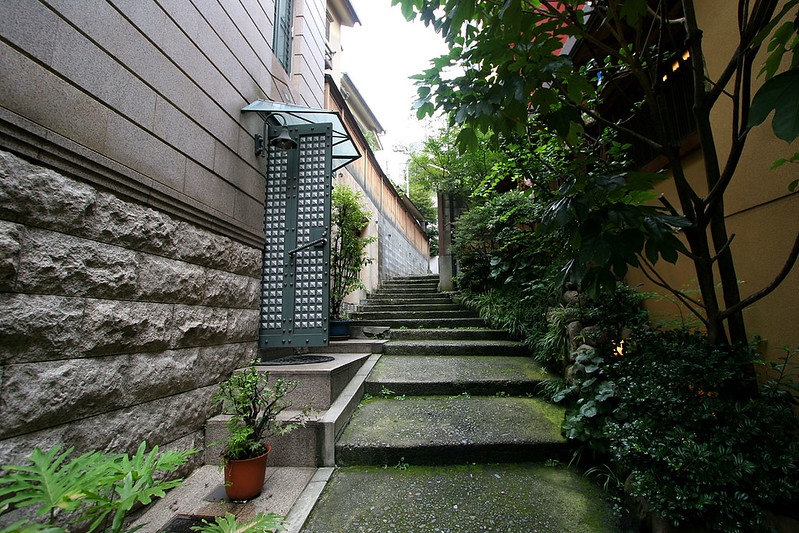 Kagurazaka is known for its stone paved back alleys from the Edo Period. While walking on the main street, turn into one of the back alleys and you’ll find lots of hidden restaurants and izakaya rooted in these areas. In the daytime, these back alleys make for a great photo shoot location as well!

If you want traditional, authentic Japanese souvenirs, then Kagurazaka is the best place to buy it. Here are some great places to shop at in Kagurazaka.

Shopping mall for everything else.

Kagurazaka is one of the few places left in Tokyo where you can meet an actual geisha. You can make reservations for a dinner geisha performance where a top level geisha performs on stage. This is an awesome way to experience the luxury lifestyle of Edo Japan.

Many people are aware of female geisha, but did you know that there are male geisha as well? They’re called Taikomochi and they’re similar to a joker during the Medieval Times (not the one in batman). Similar to their female counterpart, the Taikomochi also sings and dances on stage, but with a more energetic twist.

Atamiyu is quite different from other hot springs in Tokyo in many ways. When it first opened in 1954, it used to be a bathing ground for geisha and still uses its firewood boiler. Inside, there’s a huge mural of Mt Fuji which definitely creates a relaxing experience!

There are not too many events in Kagurazaka, but the Kagurazaka Summer Festival has always been the biggest.

The festival is to celebrate Obon, a Japanese holiday, and lasts for about a week in late July. During the summer festival, decorations are put up on the main Kagurazaka street and there are parades of various traditional Japanese dances. There are also lots of food stalls selling festival foods near the Zenkokuji Temple area. Best of all, it’s absolutely free, so we recommend checking it out if you’re in the area! 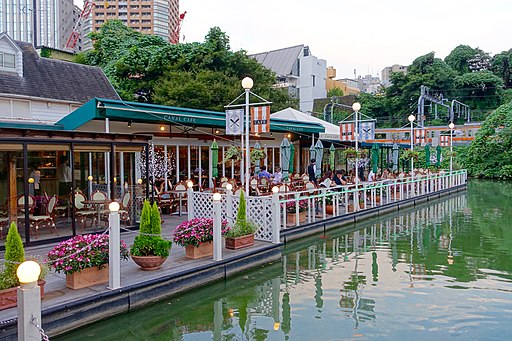 Italian food an desserts right in the middle of the river.

Where to Stay Near Kagurazaka

Kagurazaka is a great place to stay in Tokyo and there are lots of affordable options near Iidabashi station. It’s also very convenient being positioned in the middle and having transportation options to many popular places in Tokyo. If you plan on exploring Tokyo from Kagurazaka station, we highly recommend getting a Metro Pass since many of these lines operate here.